I guess 'Tent' would be a better term, as we only slept in one...
August 3rd and 4th DH and I went camping at a beautiful spot in northern Nevada called Onion Valley Reservoir.
On our way down the freeway we saw this. 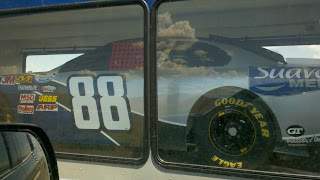 One of Dale Jr's cars headed somewhere, it was kind of cool, even though I'm not a racing fan.

Four and a half hours later, after traveling over not much better than two track, rocky, mountain roads we arrived at Onion Valley Reservoir. 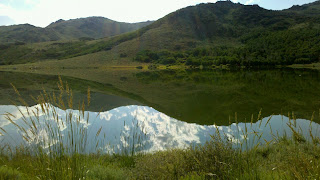 To the left in this picture is where the spring from Blue Lake (another, higher mountain lake that you have to hike to) feeds Onion and is a very, very good fishing spot. The water is clean and cold, running through a beautiful granite boulder strewn bed. I am still berating myself for not taking my phone to get a picture both times we trecked to the spot to fish (we had to park and walk a little ways). There will be another oportunity. I can't imagine never going here again. We camped off to the right of the picture in a stand of Quakies (quaken aspen trees). Yes! There is shade in Nevada! ...I've been here for over .... for a long time and I sometimes doubt the existance of shade here.
We fished in a very small area. I'm used to casting with all my fishing pole and my arm can give, but had to just limit myself to flipping my line out to around 25 feet in front of me and in an arc of around 35 feet, as I was standing on a boulder and didn't have much mobility. In this tiny area, with every cast I at least got a hit on my small spinner. The water there is only a couple feet deep and most of that is taken up by water grasses on the bottom. Derek was on another rock not too far from where I was, and had a little more room to cast than I did as he had open water in front of him.  We both caught probably twice as many fish as we kept, and those we kept were a little bigger than what I call 'pan' size. They ran between 12 and 15 inches long. We didn't weigh them. 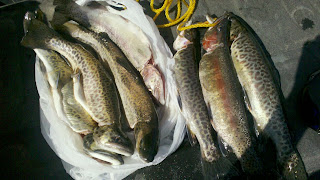 Onion is stocked a couple times a year with thousands of fish; if I remember right, over 15000 fish are stocked durring one such stocking. You can catch rainbow trout, cutbow trout (Lahontan cut throat and rainbow cross), and tiger trout (brown trout and rainbow cross). From left to right above is tiger, tiger, rainbow, rainbow, tiger, cutbow, and tiger.
When we fish we have four 'awards' that we give to each other; first caught, biggest caught, smallest caught and most caught. I got the most, and the biggest, Derek got the first and the smallest. He doesn't usually appreciate my 'award' game cause I usually outfish him :) (disclaimer, in case he decides to read this) Mostly I think this is because I'm more persistant, not any more skilled.

On the 4th we decided to drive south to another reservoir called Knott Creek. The next pics I took on the way there. 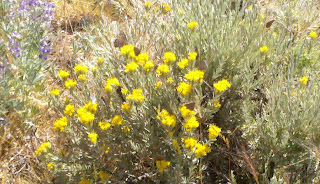 Butterfly Bush; I scared a bunch of butterflies off this bush as I walked close enough to get a picture. 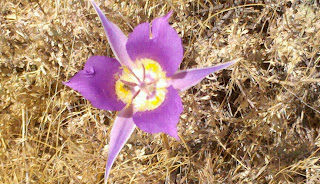 And who says there's no color in Nevada!? 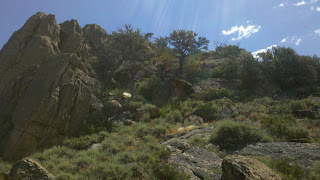 I love these outcroppings... 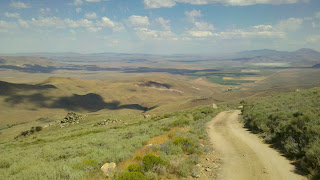 This was typical of the scenery we enjoyed going out and coming home. We were at about 7400 ft. most of the trip through the moutains.
After about an hour and a half, much nail bitting and second guessing my map reading skills, we arrived at Knott Creek Reservoir (it's only like three miles from Onion). There is no real fishing access right now from the banks, both reservoirs are over full at the moment from all the precip we had this spring, so we both agreed to get float tubes for each other for Christmas and come back next year. 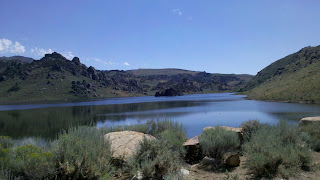 Oh! I forgot to mention Fires! Before we went on our little fishing trip, I worked in Winnemucca for three days, now I'm back again, been three nights (yes, nights, ugh), and I will probably not be called back to work tomorrow night because our fire fighters are so efficient :)

Addendum:  I posted this at work and after I posted it, it wouldn't let me back in to add...
We had stuffed trout the next night, it was WONDerful! :)
Posted by ~~Sittin.n.Spinnin at 2:48 AM

Nevada is actually very beautiful - you have to appreciate the spare beauty, and how hard things have to work to survive there (including humans).

People ask me how I can leave the forested area where I live. I tell them it's really easy! I'm used to big expansive sky, and I now live in a canyon; I love the trees, but miss the desert. Who'da thunk...

Nevada lets you look far and wide! I love the trees around but I need to able to look threw them or I feel trapped.

You both echo my sentiments exactly!

It's Hot August Nights here, which might be where that car was headed. I only realized it when driving on South Virginia in a lane that declared it was for Hot August Cars only. Many cones later, I remained there and turned right, just where I had intended.