We lost one of our family today.

Tug was born in 2004, he came to live with us in July that year. He was one of 5, born to a toy chihuahua that weighed 4 pounds. His sire was also a toy, he weighed 6 pounds. Full grown, Tug weighed 13 pounds.

Tug was a very unique dog, he was black with a white blaze on his chest; his legs were sturdy, his body a barrel; he was made for a farm.

I had begged Derek for 3 years to let me get a chihuaha, but he kept telling me he didn't want a yapping, ankle biting, miget of a dog. About a month and a half after bringing Tug home, I had to go to Alaska on a fire assignment, when I came home two weeks later, Derek belonged to Tug. He jokingly told me one day, after Tug went to him instead of me, "You know, you really ought to get you one of these dogs...". Tug was my husbands best friend.

He did this cute little dance, standing on his back legs and pawing at the air when he wanted you to pick him up, or wanted to go for a ride. He loved to play fetch and of course, he loved to play tug with an old knotted sock, for which he got his name. He would sleep at night between Derek and I, keeping warm and returning the favor.

He never yapped, he never nipped, he was a 'big' dog.

Sometime this morning, he was killed by coyotes.

Our lives will never be the same. 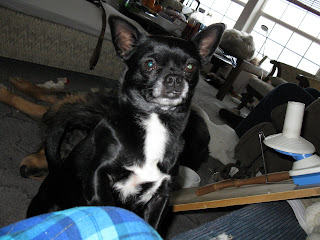 Oh that's horrible!!! I'm so sorry. We have alot of coyotes here too.

Ahh sorry Becky. Loving pets is the shits at times. He was sure cute! We've lost many cats to coyotes but not a dog.

I had to put Denali down (the big horse) Sunday - I'm feeling a lot like you, I think...

Oh man, that's hard to take. It's a constant worry here, in spite of our guys being inside a fence. The coyotes really know how to seduce a dog. I am sorry.

That is terrible! I am so sorry for your loss.

Oh I am so very Sorry for your loss -

I am so sorry to hear about Tug, Becs...I know this has hurt your whole family. Even wee animals leave giant holes in our hearts when they leave us. I pray that one day, fond memories of Tug will replace all the hurt you are feeling now.
You and your family are in my prayers. I am just sorry this is belated.