Losing Tug has kinda put me in a tail spin. I mentioned in a previous post that I was teaching a spinning class last Sunday; that was the day before Tug died. When that happened, nothing else seemed very important.

But that Sunday night coming home from Elko was a total white out, and I wrecked my car. Kinda played ping-pong between the guard rails. I'm fine, didnt even hit my head on the window, the car is dinged up, which is really unfortunate since we just got it back from being worked on after it was hit in December.

Now lambing is in full swing, and this year is moving so fast it doesnt seem real.

We had four more lambs yesterday, Scarlet and Babs both had twins, so the count is 6; 2 ewe lambs and 4 ram lambs. 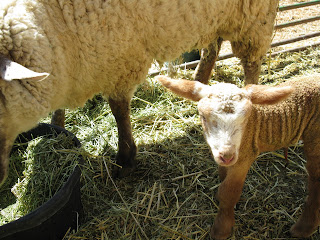 This guy is out of Babs, she is a brockle, a dorset/suffolk cross, so hes a mut :) love that piebald face! His sister is a bit darker than him with a white tuft on her head. 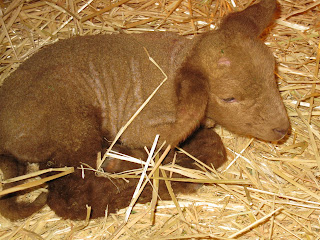 This is one of Scarlet's boys...

Honey and Vanilla are all thats left out there, both look ready to explode, I think we'll be done by the end of next week.

Thanks everyone for your heartfelt comments about Tug, we miss him very much.
Posted by ~~Sittin.n.Spinnin at 1:17 PM

Wow Becky, I'm really glad you've got the warm fussy of the lambs. You've had a time of it lately!

Never a dull moment for you! What has been happening with your little Grace? Good thing your new lambs are well.

OMG It's been forever since I have kept up on your blog, all of them that I follow :( I am so sorry about Tug, I truly know how hard it is to loose your furry friend.
Looks like you are getting alot of additions though, cut little sheep,they look so soft and cuddlely.
Your 3 ply yarn is beautiful,you always do such a great job spinning!
Hope that all you sheep and lambs do good, look like alot of beautiful fleece there :))

I hate those coyotes. Sorry to hear about your little Tug.

I hope Grace is "mellowing" out. And keep us updated on that odd lamb, very interesting.

Good luck with the last one to go, I hope it is beautiful, healthy twin ewes!