Just a quick note to show you something extra special! My sis called me the other day, said she got dive bombed by a bird that had nested in a tree next to her porch. This isn't just any bird. You all in the exotic parts of the earth (like Arizona, Washington, California and Oregon) have probably seen more of these little beauties in the last week than I have in my entire life. They just don't happen in northern Nevada, well at least not too darn often! :) 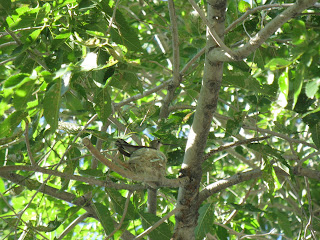 This picture is zoomed as far as my camera can zoom; she is about 3 inches long, her nest about half the size of a Chinese tea cup, maybe. Her beak is roughly half the length of her body. The nest really amazes me! Im used to seeing these twig nests that other birds build, this one is so neat and tidy it is almost smooth, like adobe. I think she is a black-chinned hummingbird, one of the few species actually found in Nevada, but I'm not positive.
So that was the highlight of my week. Oh besides the fact that my chickens love me now! They come running when I go out to feed and call 'here chick, chick, chick!'. I have to be honest though, I think they only love me for the corn on the cob that was left over from the 4th :)
Happy bird watching!
Posted by ~~Sittin.n.Spinnin at 12:11 AM

How cute. I've only seen one hummingbird nest how special to get a picture. I think chickens are sweet also!

I've never seen a hummingbird when it's not moving. They are real fast.

Yup. We've been having hummers dive-bombing us when we're outside lately. Right now it's the ladies, but closer to fall the boys fight each other - over what, we can only imagine as breeding season is over by then.
I always hear the guys, who make sounds when they fly. The gals are silent, but enjoyable to watch as they sip nectar from flowers.
Thanks for sharing. I'll try to send more of them your way! heeheehee

I've never seen one of their nests before. We have a pair of calliope hummingbirds hanging out here. Ian feeds the birds shamelessly. I spend many mornings on the front porch with them as my music.

In my reorder after the dog incident, I ordered some Araucanas too. The get shipped today. Yeah maybe you are right, maybe we all are. :)