Its been down in the low 20's for three nights in a row! I really don't like winter at all.
It snowed in the mountains yesterday, and spit a little on us here in the valley. Mt. Louis has a fine dusting this morning, always means winter is here. 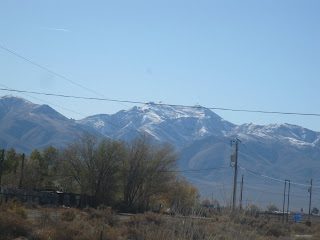 We will be taking delivery of the last load of hay for the winter today. I hope that with reducing my flock I wont have to worry about hay again until next fall. I have 7 sheep left now, not counting the last lamb that will go in January, down to Carmine and his 6 girls. I still haven't been able to shear the last two girls that I wanted to get done, its just been too cold. I am afraid what I will have to do is shear them and leave them in the garage-barn for a couple weeks until their wool grows back out a bit; it doesn't look like we're going to have any more warm nights.

I finished Joy's scarf! I did it a few weeks ago, just hadn't had a chance to take pictures of her with the hat and scarf on. I really enjoyed working it up and the end result is more than satisfactory! 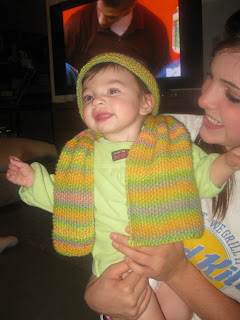 Kevin and I took a trip to Moab, UT a couple of weeks ago, where my good friend Sam (Mary Ann) Cunningham lives and raises Tunis sheep, along with guanaco, guanaco/alpacas, Navajo Churros, CVMs, and various other wool/hair/feather bearing critters. She got the last two Tunis lambs I had. We do this pretty much every year, I take her registrable sheep and she gives me elk meat from an elk ranch in Montana (I would personally rather eat elk than beef; it is leaner than beef and you know its not raised with antibiotics or growth hormones). And as a bonus, I always go to Arches NP when I'm there. Kevin was the only one of us that hadn't been, and I think he really enjoyed himself! We both ended up wishing we'd had more time, as there is sooo much to see and do in the Moab area. It's the Jeep capitol of the world, they say! I haven't had a chance to go to Canyon Lands NP yet, maybe next time. 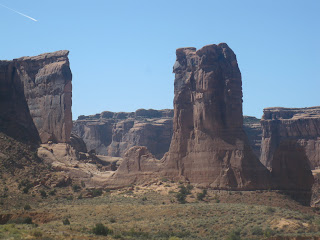 We took so many pictures, but I think I like this one the best. I don't know what this formation is called, but it should be something like 'the knife'. 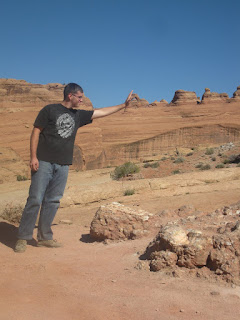 This is the 'Delicate Arch', the one that adorns Utah's license plate. We hiked up a hill (thought I was going to vapor lock, I need more exercise!), about 20 minutes to get this close (click for big); come to find out there was another trail that takes you right up to the arch, but that is a 4 hour round trip! Glad I didn't try that one lol 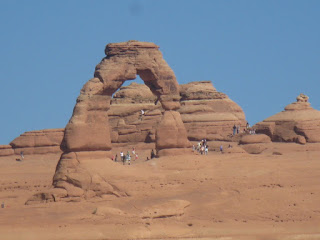 Sam also threw in a few pounds of roving for me, along with a big box of canned itesm. She is always more than generous, giving more than she takes, no matter how much I argue. I have been reprimanded by her more than once for trying to give her more than she gives me, or tell her to not give me any more than what I think she should. The roving is a blend of CVM, alpaca, and guanaco and is very pretty. Kinda wish it was something besides gray, I have so many grays, but it is soft and has a lot of character. 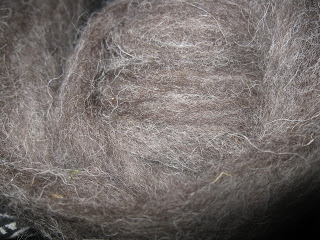 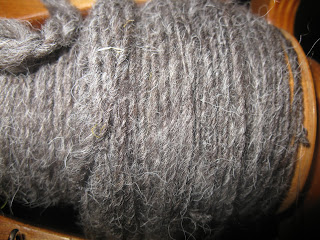 I finished a scarf that I've given to my bff, Brenda, for her birthday, she loves it thank goodness! 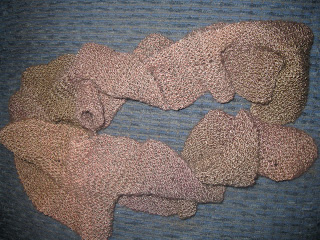 I bought the fiber at BSG, two bumps of merino silk top, one was a brown, the other the same color brown with maroon/pink ish areas. I spun each then plied them together.
This picture doesn't do it justice, it is very pretty and lustrous with waves down both sides affected by knitting in short rows.

Joy is growing up so fast! Almost as soon as we brought her home she was standing in our laps rather than laying prone like infants usually do. Now she's walking! She started about 6 weeks ago, now she almost has it perfected :) 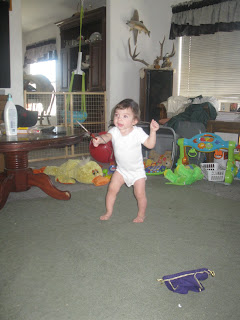 My goodness, that was a lot to take in. I like the last image of Joy propelling herself across the room. Put your important things up high!

Your little granddaughter looks adorable in her handknit hat and scarf set. Keep up the beautiful knitting (and spinning) Becky :-))