I know, its been too long since my last post, but a lot has happened!
I had been knitting and knitting, making hats, scarves, socks, spinning, and knitting some more.
Then, outta left field, someone hired me.

Don't get me wrong, I do want to work, just not very much. I'm spoiled. That's the only explanation I can come up with for the resentment that I feel over having to go back to work full time. And the fact that I have a college education and I'm bar tending. Sometimes. Most of the time, for now, I'm 'hosting' the casino floor, which takes the brains of a small amoeba to do. I like bar tending, always have, but not as a career. A hobby maybe. Unfortunately, times are such that any money coming in is welcome money, and my fairer sensibilities be damned. Another resentment comes from the fact that as long as my DH and I have been together I have had a paying job, as well as the one that I didn't get paid for, and have never had any help with the 'non' paying job, and I'm pretty sure that wont change now. Leopards and spots and all that jazz.

On a more optimistic front, we got new phones! They didn't work, but that's OK now :)
We were with Altell, which sold out to AT&T. AT&T sent us new phones that would work on their network. And the problem with that? We don't have AT&T network in this area!
So three frustrated days later, we switched to Verizon. Since the phones (4 of them) were replacements for our Altell phones, we didn't have to send them back to AT&T, so I'm selling them on ebay. Two of them (Palm Pre and a Blackberry) have sold with 'buy it now' and I've been Christmas shopping. I've got Derek's presents ordered except for his cigars, and have bought Joy several things (she'll probably play with the boxes), and have of course been forced to take a sellers fee, and ordered "The Gentle Art of Plying", "Aran Knitting: New and Expanded Edition", the new "SpinKnit E-Mag" from Interweave and Bare Minerals makeup for the new job. Ah, the trials and travails of online commerce!! I'm so excited! I'm down loading the E-Mag now, and if you haven't looked into it, go check it out, the teaser video convinced me!

In the middle of all this, my sweet grandbaby girl had her first birthday on December 1st. She really enjoyed her cake :) 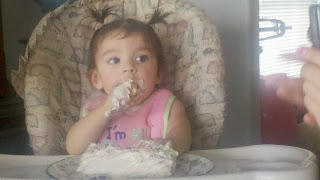 Jari and the baby-daddy took Joy to Vegas to visit her other grandma and grandpa and are headed back today. We will most likely go Christmas tree hunting this week sometime, and for the first time in 5 years I want to put up outside Christmas lights. ...I still can't quite believe that he is lost to me forever, but it seems to be getting easier to deal with. So up with the lights! It's Christmas time!

ETA: I got this in the mail last week and am dying to share it. 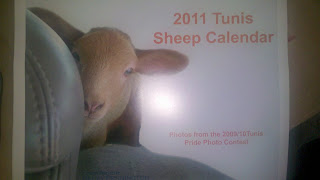 This is the NTSRI's (National Tunis Sheep Registry) first annual calendar, and Gracie made the cover! Another of our pictures was used for January. I am so excited to have our pictures chosen! Thanks to all who had a hand in the making of the calendar!
Posted by ~~Sittin.n.Spinnin at 10:19 AM

Becky, I'm glad Christmas is getting easier; I'm sure Joy is part of that! We have a very "traditional" marriage, too, so I hear you on the "unpaid" work. I have to focus on my many blessings or I can get kinda growly....

Well, they couldn't have had a CUTER photo than THAT submitted! Congrats!

Oh my - so much. Congratulations on the job, I think. Joy and my son Josh share a birthday - very special day.

As for the cell phones - we endured ATT all the years we worked but after we retired, they were dead since there there's no signal here. We migrated to Verizon. It could be better, but the phones work for texting. I hope it gets better.

Congrats Becky on the Calender and the new job.
It must be so nice to have a 'little one' around at Christmas.
December and Christmas will always have happy and sad memories for so many people. Our family has some very sad ones too.
Take care.

Working at home does have it's pluses. I love being home but it means I never have a day off! Still like it thu. Congratulations on the pictures in the calender. The picture of Grace is one in a million.

Oh wow, Becky! I am so excited to learn about your new job. I certainly understand the dilemma you are feeling. All those projects you had lined up, now have to go to the wayside! But, Congratulations anyway!