I planted peas! I haven't been in a garden with peas in it since I was a kid! My Mom still swears not one pea made it into the house! We would stand in the garden and eat them right out of the pod! I'm going to try to get some of them into the house to can this time round, but no guarantees!

You read so many things on line about how best to do something, it's really hard to decide what is right for you! For instance, one blog I read, suggests that you just kind of toss the seeds out into a square plot, and let the pea plants grow together and they kind of support themselves, without the need of a trellis. This kind of made sense to me, but at the same time, how would you get to the pea pods on the central plants? Then I saw the plans for a home made trellis, cost is less than $15, total! I decided to make it, and blog about it. As in most things I do, I've done it my way, so it's slightly different from the original plans I read about here. I got my slats from Home Depot, talked to three people before one of them didn't ask me if I wanted survey stakes and actually knew what I was looking for :)
These are 4 feet long, by one inch wide. They're only about a quarter of an inch thick. They're thin enough that they are slightly flexible, and remember, this is pretty much throw away wood, there will be knots, and they aren't going to be totally straight. I don't think this will last much more than one growing season in northern Nevada. Between the wind. the sun and the constant wet/dry conditions , I will be really surprised if it lasts much past harvest. 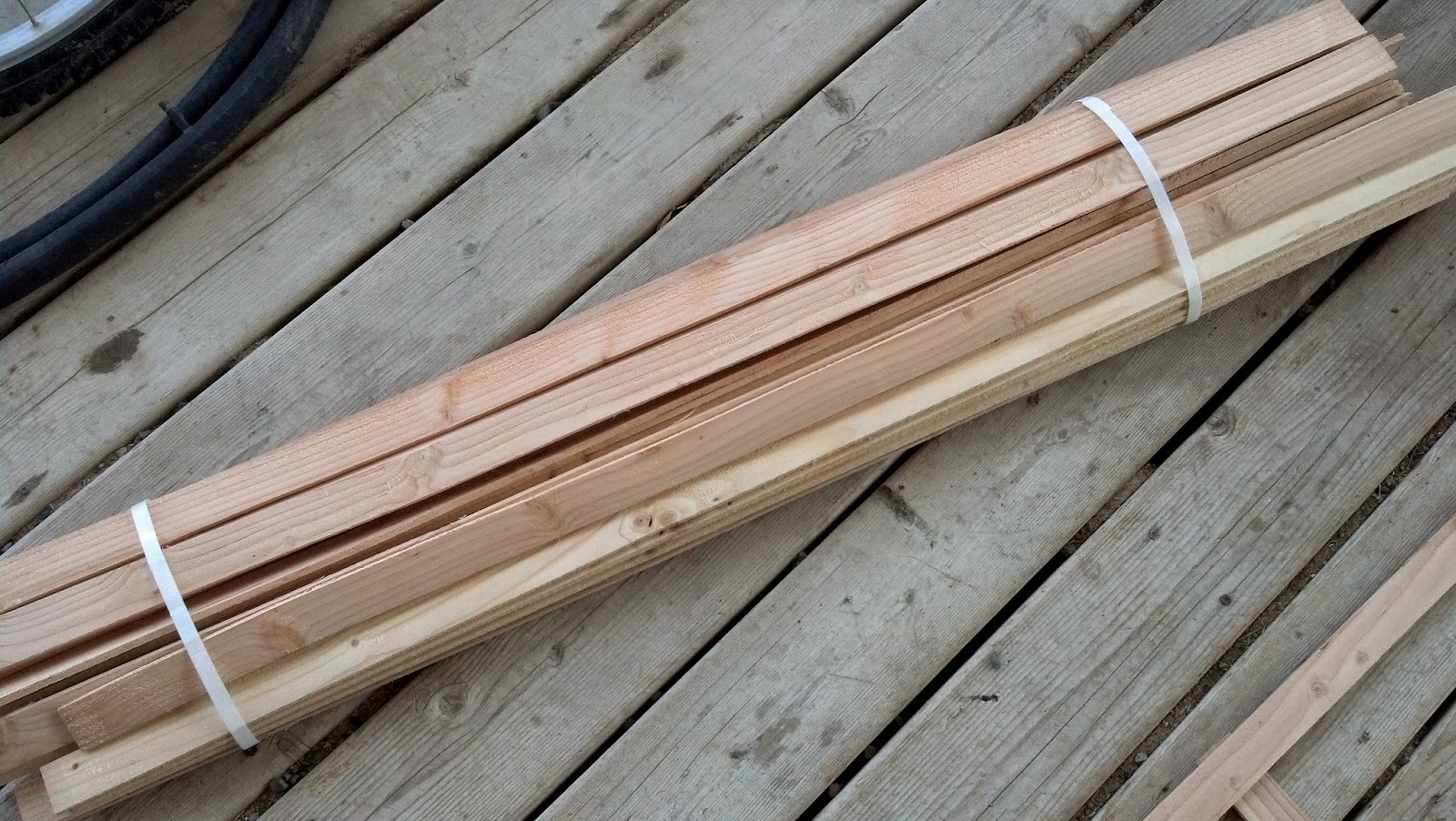 I laid out 4 slats... The large elephant (hole) in the porch is a constant reminder that my kids almost burned my house down. Long story. Moving on. 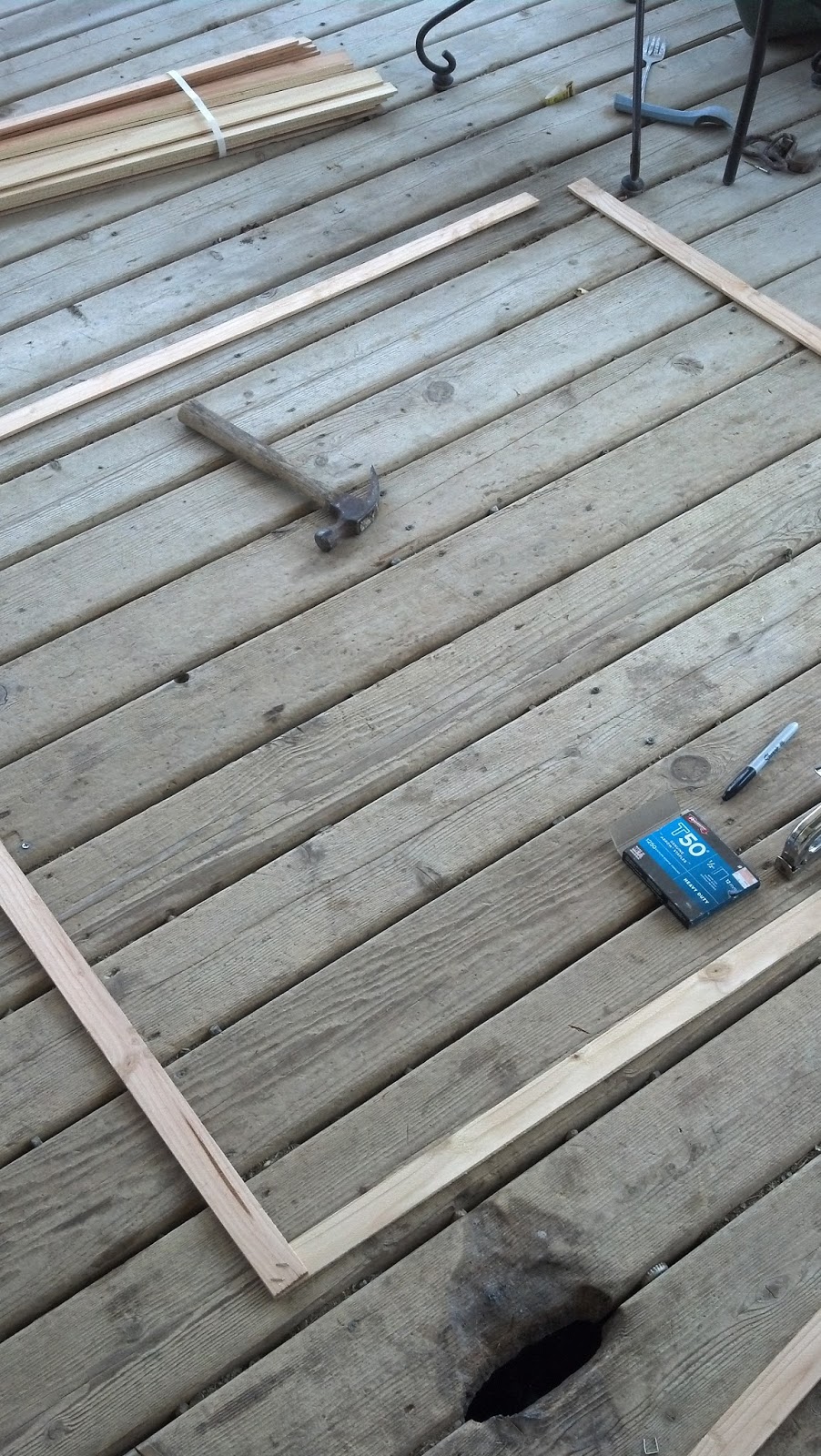 I over laid all the corners, then double checked to be sure they were all as close to square as I could get them and stapled them together. With this heavy duty stapler, I had to put two slats under the back end of it so it would sit even with the ones I was stapling, otherwise, the staples didn't go in enough for me to hammer on home. Another person may have had enough arm strength to do this without a crutch, but personally, I appreciated it :)
I placed two staples per corner, and then tap-hammered them to make sure they were flush on the wood. 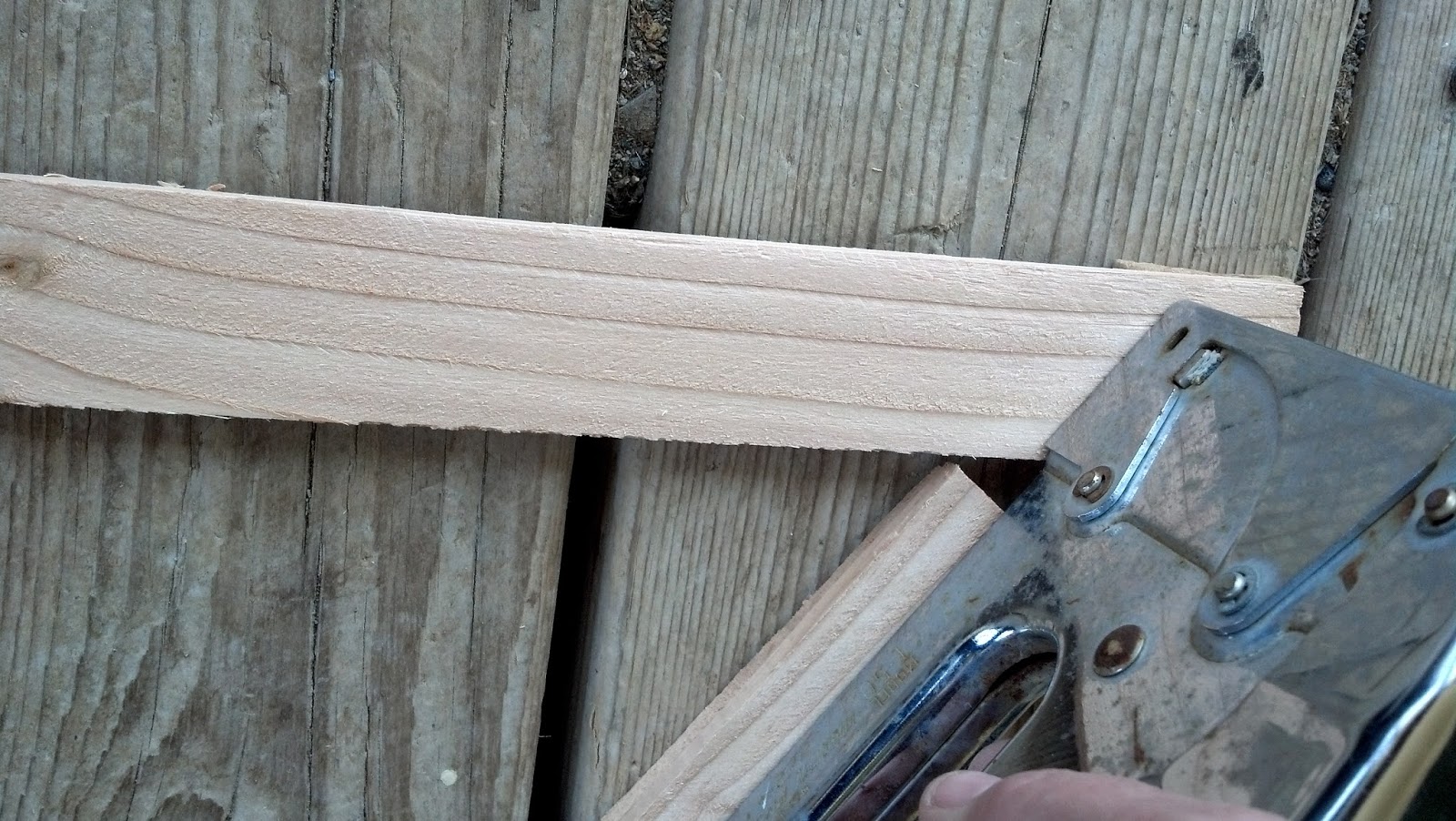 Then I took my measuring tape and marked out each foot, three marks total, top and bottom. 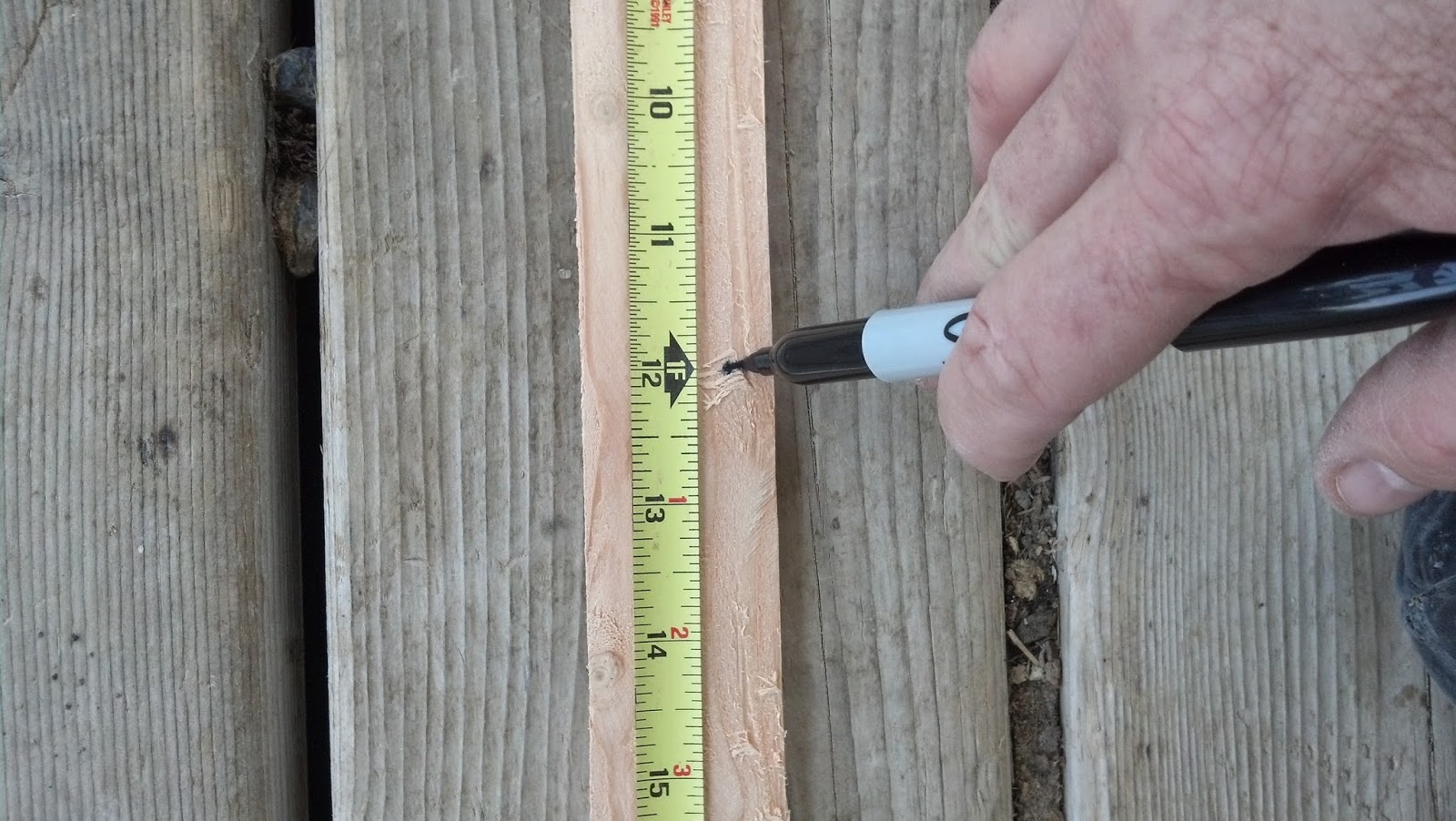 Take three slats and lay them at the marks, double check to be sure they are straight, then put two staples in each end of each slat. 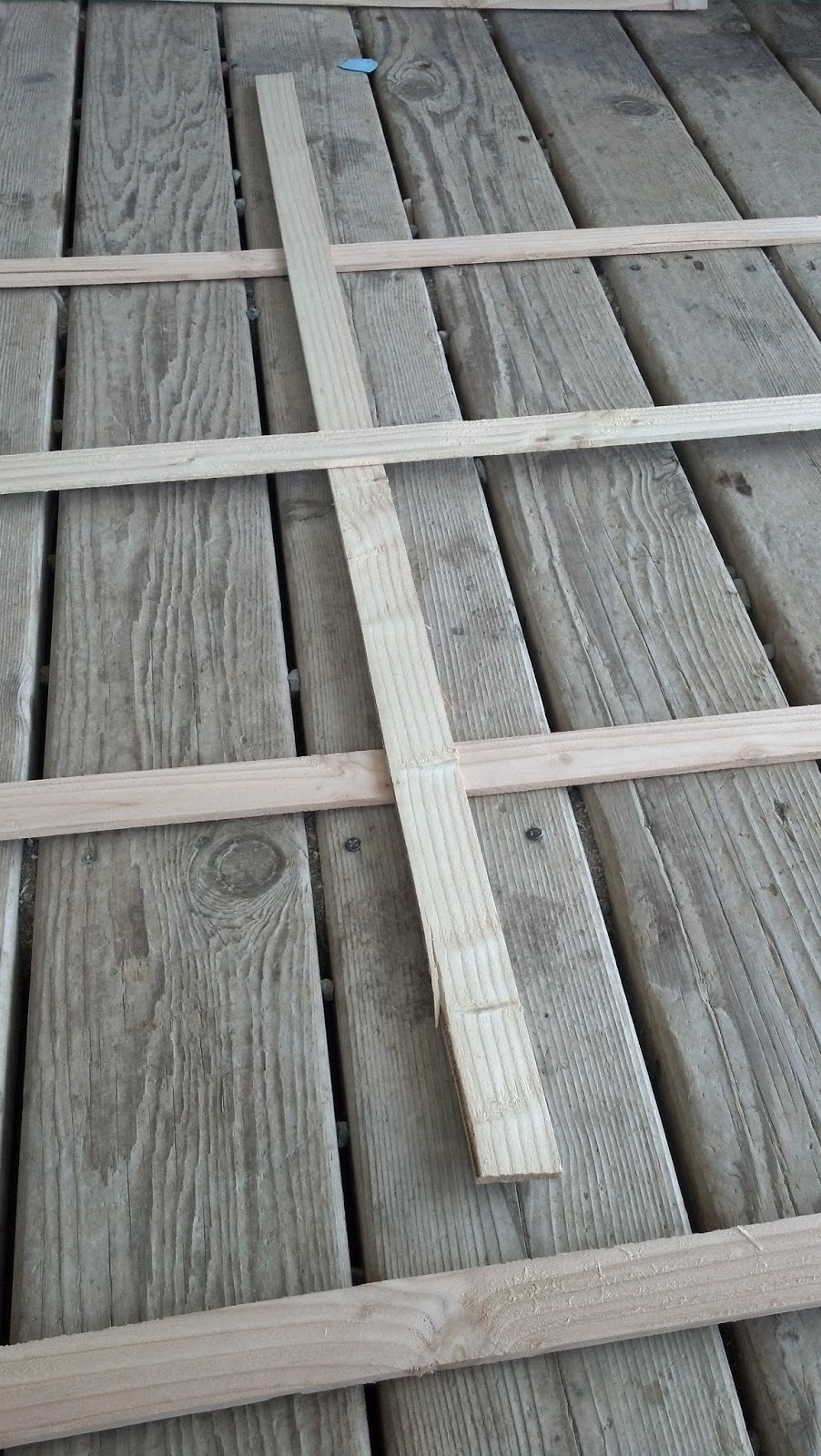 Mark out each foot on the sides to place the cross slats. These I wove through the other three. I started with the two on the outside, these will be woven in the same way; under, over, under, with each end of the slat on top of the frame. Staple down.
The middle slat will creak a bit  when you put it in, as the cross slats are tighter now with the other two slats in place. This one will go over, under, over, with each end of the slat under the frame. Double check your marks then staple. 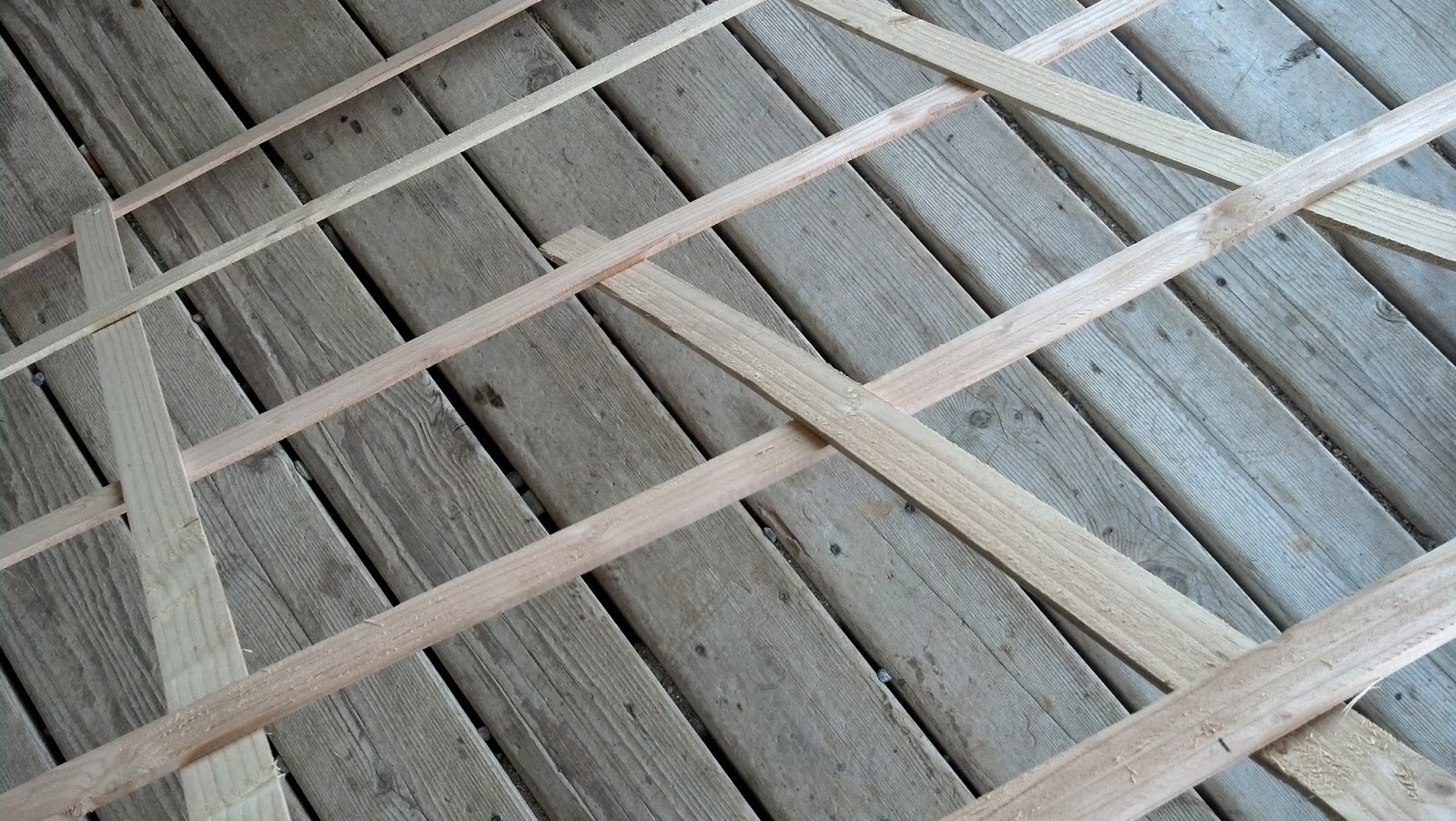 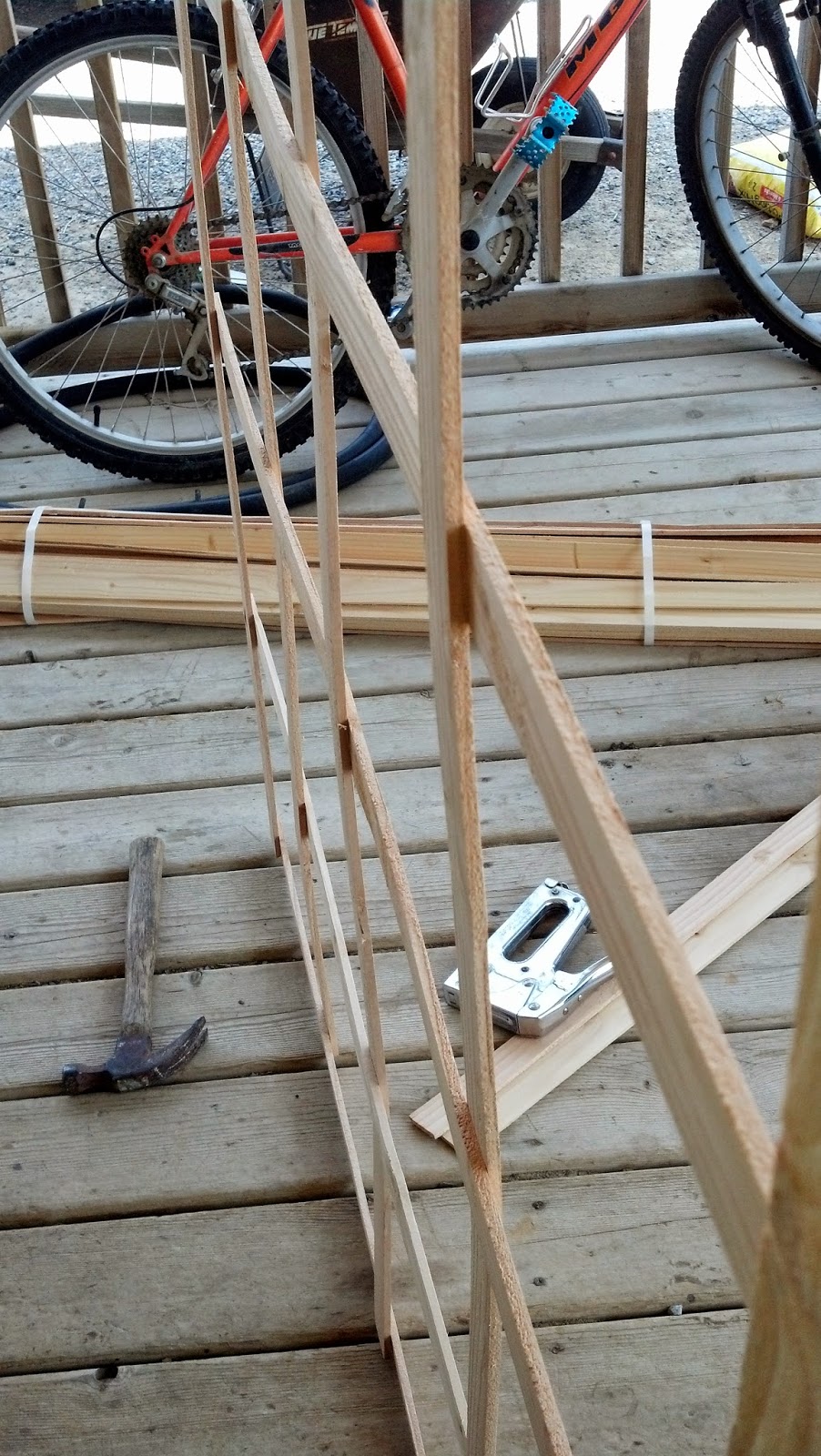 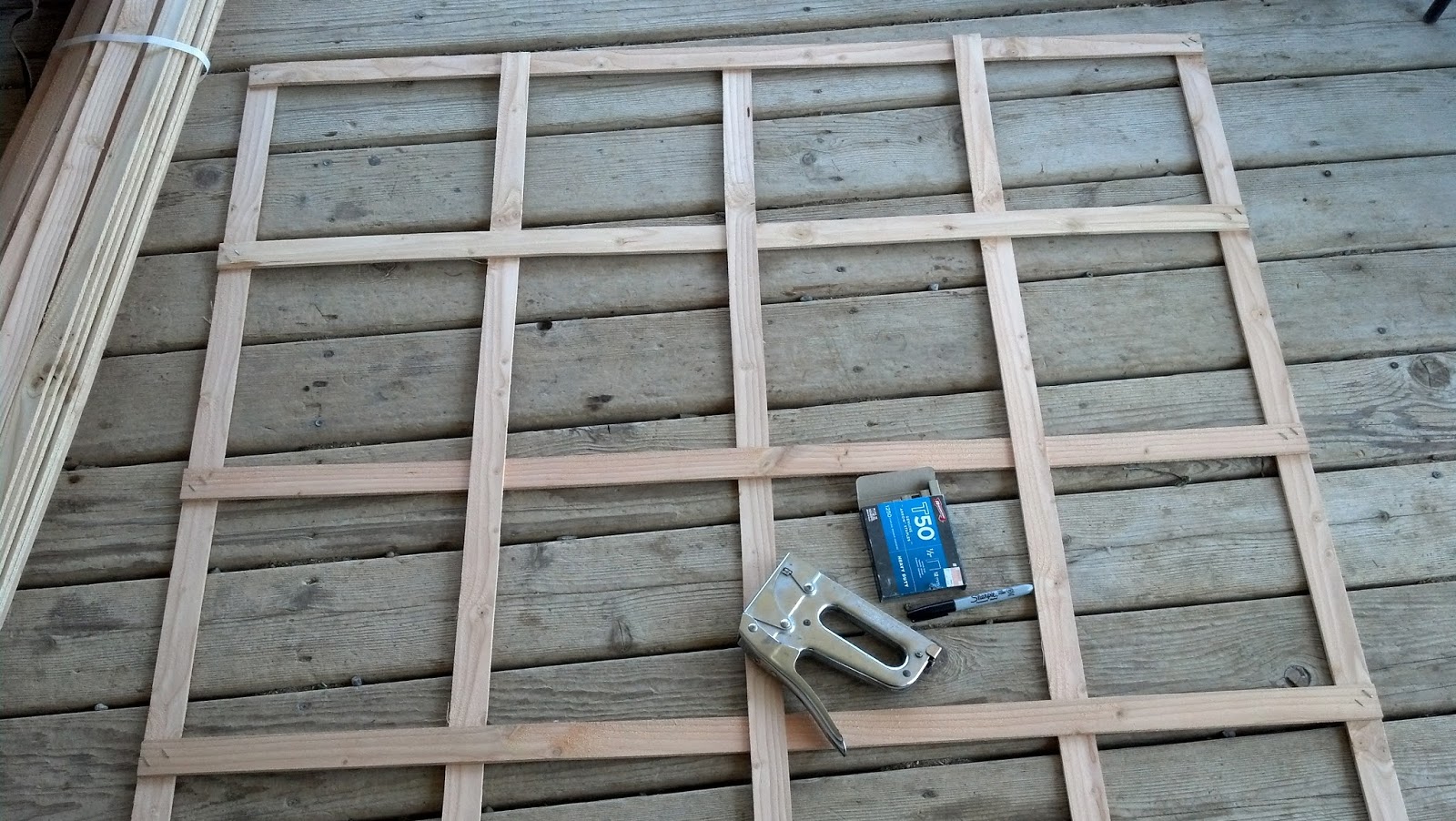 One side of the trellis down, one to go!
And... repeat!
And now there are two!
Let's put them together...

This is a bit of black plastic that is used to line leach pads. It is thick, heavy and flexible. I cut the block out of a huge sheet I've been mining from (pun!) over the years for various purposes. I'm going to make more of these trellises so I cut a few strips. These are about 10" long, and I cut them in half. They are just a little long, so strips anywhere from 4 to 5 inches should work fine. 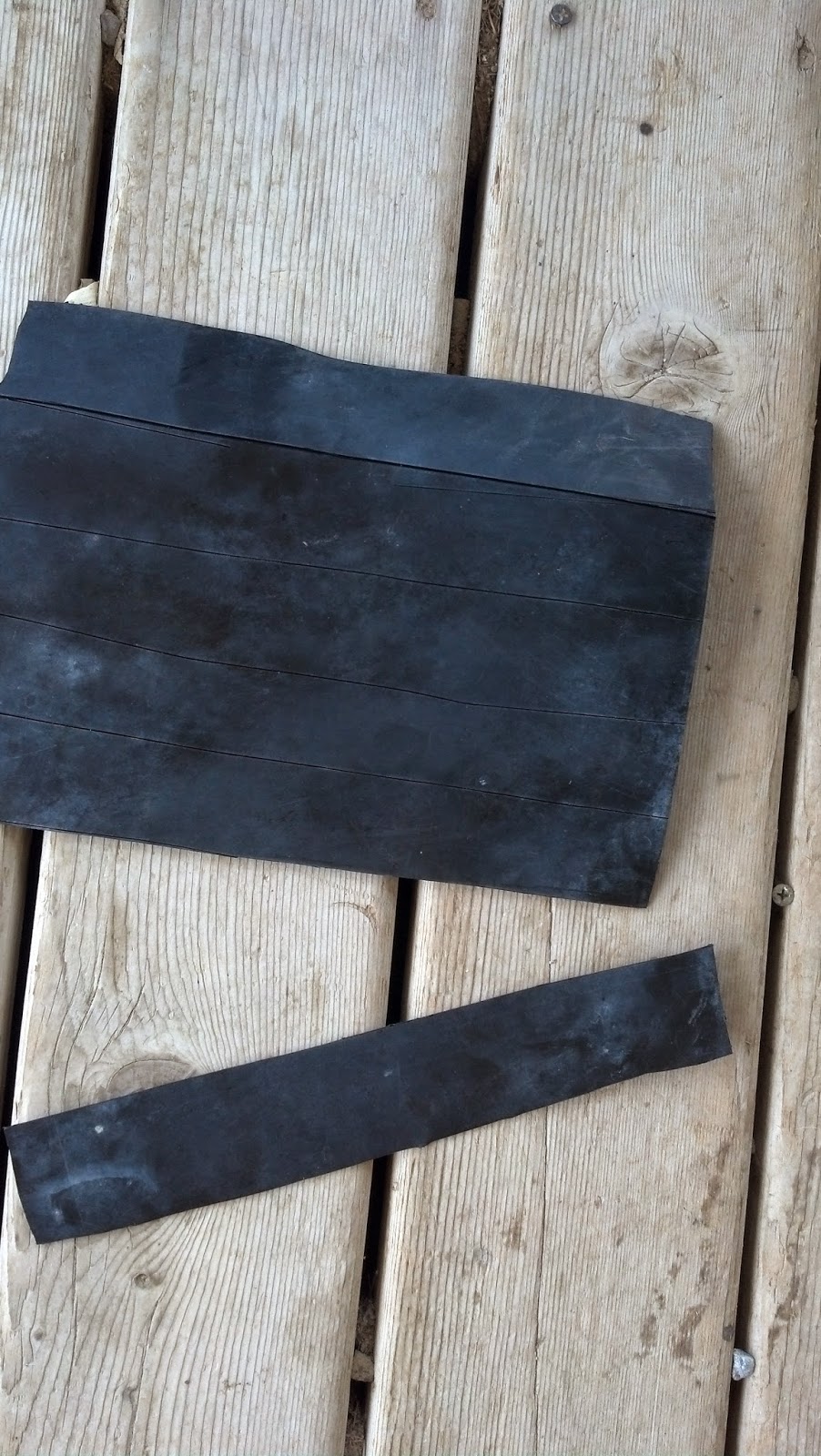 Put your two trellises together, and decide where you want to place your plastic or rubber strips. I place them between the frame and the first slat to either side, just because there weren't any staples there already. I put the bottom slat of my staple crutch between the two trellis frames, then stapled. And guess what? I stapled them together!! Thank goodness the staples come out without too much trouble! 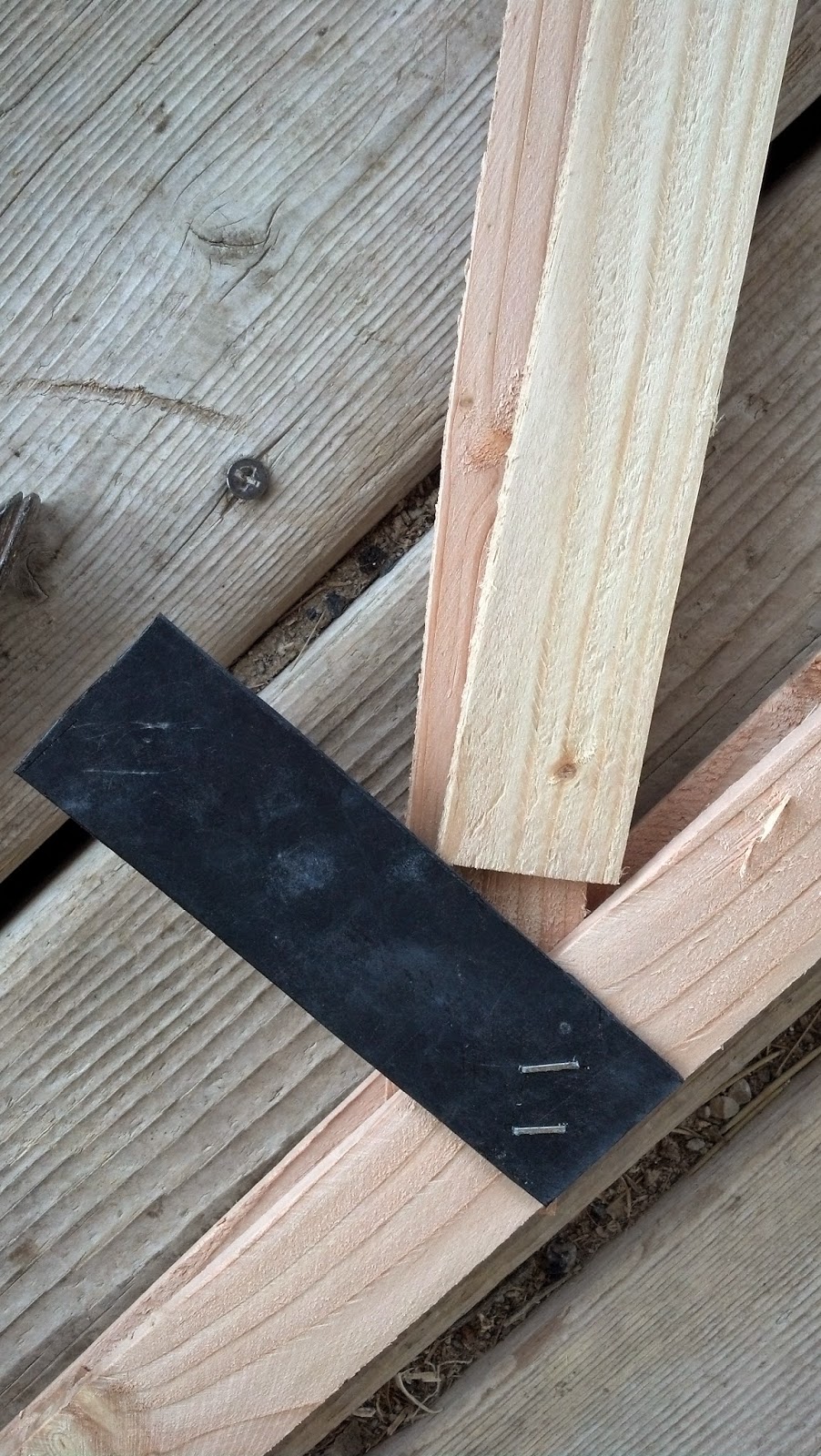 Get both strips in place on once side, and flip! Bend the strip up over the outside of the frame, and staple in place. 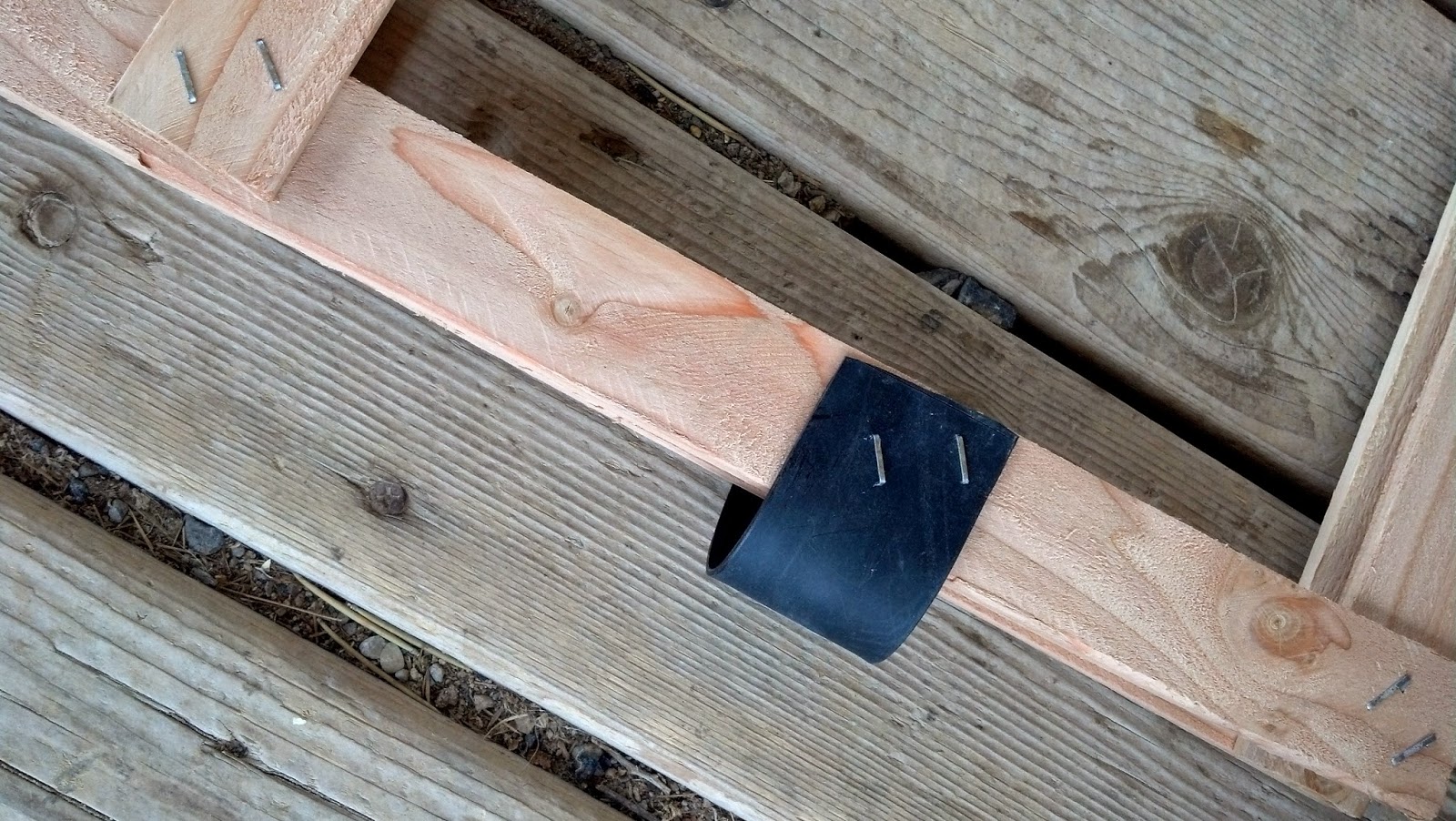 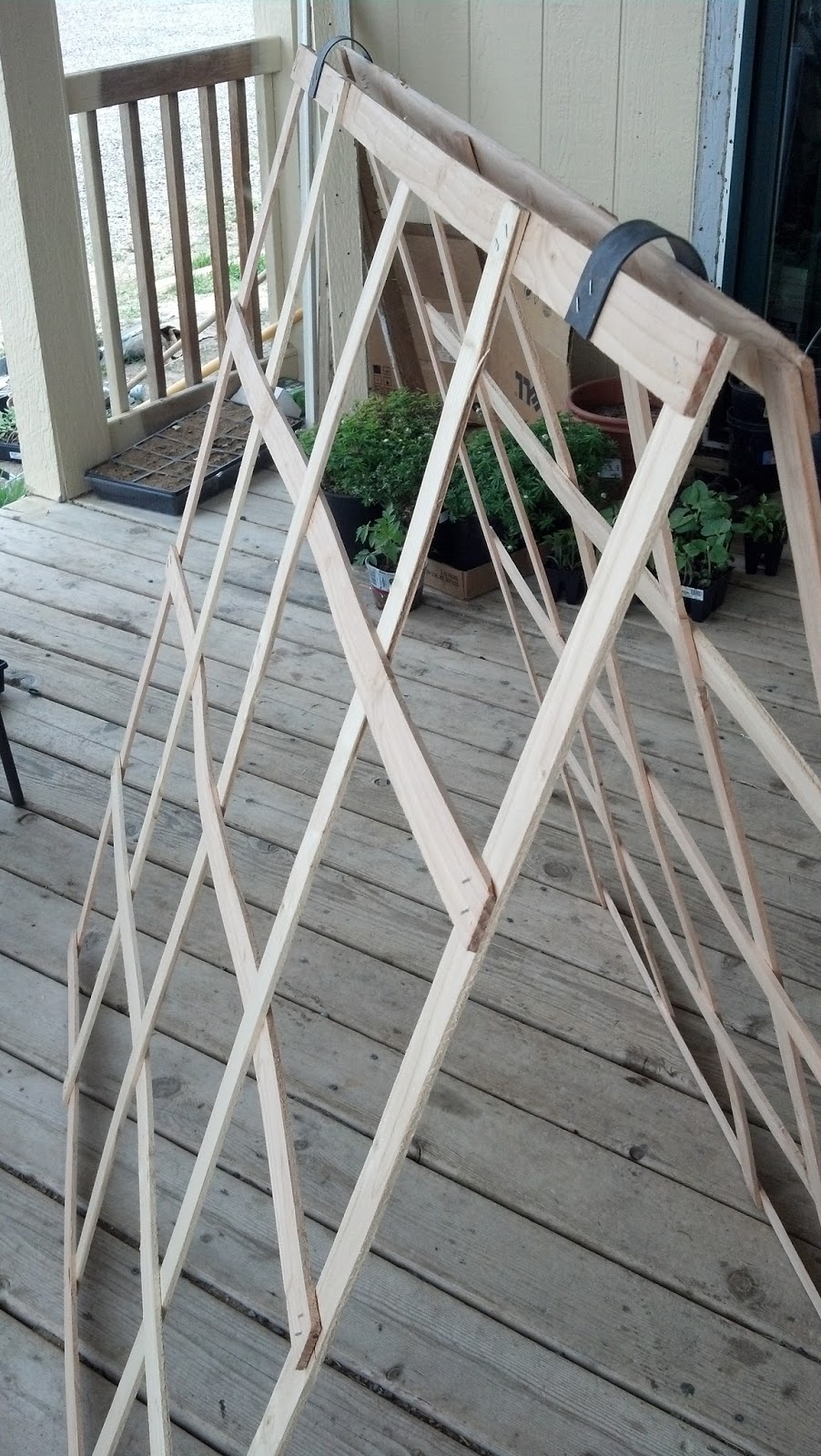 Now all that is left, is to find something to anchor it down in the garden. 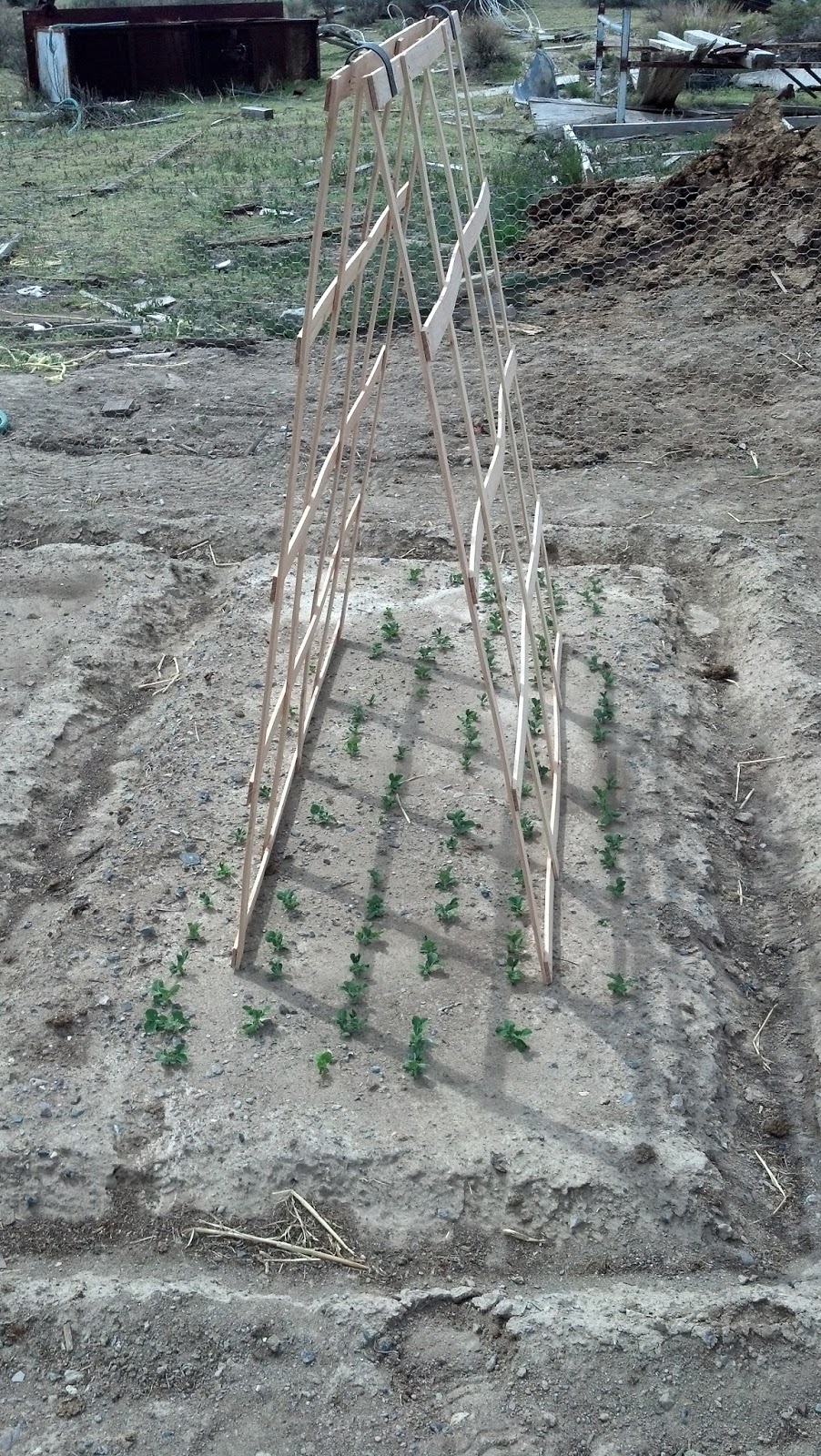 I believe it's going to have to be a T-post, as it will need to be anchored at the top to keep the wind from whipping it about.
I might put two in there, and put them cross ways of how it is in this picture, mainly because this pea bed is in the south side of my garden, and anything to the north of that trellis will be in shade. If I put two in, and turn them crossways, at least some sun will get through.

You can plant lettuce in the shady spot!

That would work! But I don't know what I'd do with the lettuce. I am not a big salad eater. Cabbage! I can plant cabbage :)