I have this fleece. I have had it for three years and have been picking at it off and on in an effort to make it last as long as humanly possible; in fact it was this fleece that Michelle's purple yarn came from. I was talking to Laura the other night, about everything, I think we were on the phone for over an hour, always love those conversations :), we got to talking about different types of fleece and I got on the subject of this romney I've had forever; I started to itch. All of you who work with raw wool know exactly what I mean. I swear as a person who has been there, learned a lesson, and got the T-shirt, there isn't much difference between one addiction and another. I could smell the wool, I could feel its silky goodness in my hands and I could see its shimmering luster as I played out the draft into the orifice... Ahem..... moving on lol
As soon as I was off the phone with Laura, I went into my adopted girls room and started digging in the closet for my romney!

Here is what I spun. This is my attempt to do a somewhat bulky single. It isn't even by far, but I don't think it was bad for my first attempt! 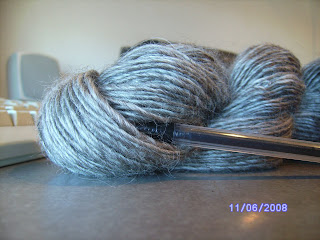 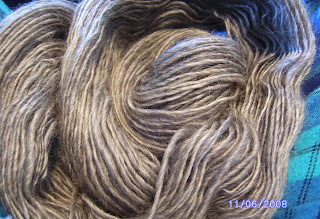 There is a discussion in one of the Ravelry groups that I follow about relaxing singles, where I got the idea to try this. All I did was wash it in hot water with just a small bit of Dawn. There are a few places in it where it is thinner than others so it is twisted tighter and didn't calm down as much as the thicker areas, but I don't think this would cause a problem when making something out of it. I don't know if I will be able to though, because of the thin spots, they will stick out horribly.
Posted by ~~Sittin.n.Spinnin at 11:37 AM

You will be amazed at how great it will look when you knit or weave with it. What a great color and I think the wonderful natural way it looks will be stunning!

Perfection in spinning, but then I've come to expect that from you. I miss Laura more than I can tell you. When she lived here we had extensive conversations, but I'm not good on the phone for more than ten minutes. It's a defect - sorry.

I am amazed at the spinning--I worked so hard to get my singles fine for socks and lace and when I tried to go back and spin thick again so I could knit some bowls for felting............I couldn't do it!

I think it's great, mate! And remember...only God is perfect and even He put pits in avocados! heeheehee!
Honestly, I think the saying "it all comes out in the wash" was first used by spinners. I don't think you'll notice any thin spots when its in the final project.
Again, a solid good onya, mate!

I think you might be surprised at how those thin areas will blend in. The yarn is lovely and will make much more interesting fabric that "perfect" yarn.

After all, why spin if you only want yarn that looked like a machine produced it?

Good going! Your yarn should make so interesting fabric.

If you're going to knit with it, be sure to combine knit and purl stitches or use a garter-stitch based pattern (like garter lace). Even a relaxed single will bias, since its energy hasn't been balanced by plying.

I found the "lost" yarn to finish my sister's mittens this weekend (she didn't know it was lost). It's from two romneys who are no longer with us, and there's no more to be had - needless to say, I was a little panicked! They're really cool, and on size 1 needles with a dk weight 2-ply, should be firm enough to stand up to Nevada winters.

As usual, your yarn is lovely - keep up the good work!!

Thanks for your comments on my blog. I made a post for you about downsizing the Tunis sheep. It wasn't the breed itself - sheep just didn't accomplish the task I set for them (clearing brome sage) and their wool makes them cavalier about electric wire.

Well, if you do knit with it, there is always the option of cutting the thin bits out and weaving in the ends, too! Love the singles, and I am desperately trying to learn how to spin like you have there -

It is beautiful. I am sure you could make something with it. A fun hat made with bulky yarn or a scarf that was thin and long, that would be pretty too and knit up really quick.